Thank you for joining! 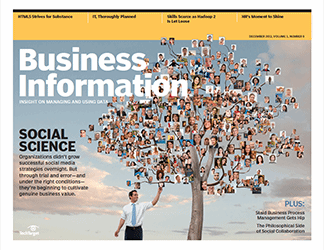 This article is part of the Business Information issue of December 2013, Volume 1, Number 6

As Hurricane Sandy battered New Jersey and New York in 2012, the American Red Cross was experiencing a storm surge of its own: millions of rapid-fire messages about where to send help. People used Twitter, Facebook and other social networks to let the humanitarian organization know where victims were, the kinds of assistance they needed and even problems with relief efforts. "I was upset to hear that the Red Cross is pulling trucks from Seaside Park, NJ," Kelly Hay Gatsch wrote on Facebook. "We still have no power, running water, or food." Red Cross volunteer Cheryl Brassington Edwards replied, "Trying to get confirmation from [headquarters]. Bear with me for a while." Lauren Horwitz Real-time information like Gatsch's helped the Red Cross determine how to respond during the crisis -- and quickly get food, trucks and other resources to victims. But the Red Cross' ability to respond so swiftly during Hurricane Sandy stood in stark contrast to its more reactive approach just two years earlier, when a catastrophic earthquake struck...

Features in this issue

News in this issue

Columns in this issue