In this, part two of a spotlight on records management, we explore how companies are moving to cloud-based records management to reduce costs, eliminate redundancies and pool resources. In part one, we profiled companies that have begun the modernization process through digitization of records and more.

Up, up and away

Some notable examples of modern records management are emerging. In 2007, the Oregon state government began to digitize, because maintaining paper and digital records together was no longer feasible.

"Even with the best records management program, if you don't have a tool you're not going to do it, because it's too hard to do manually," said state archivist Mary Herkert.

Digitizing paper records was just phase one, though. The real goal was to streamline processes and reduce spending on technology infrastructure.

By establishing a series of private clouds for various departments, hosted by Chaves Consulting, the state could create a secure repository while also eliminating some of the headaches of managing the infrastructure itself. 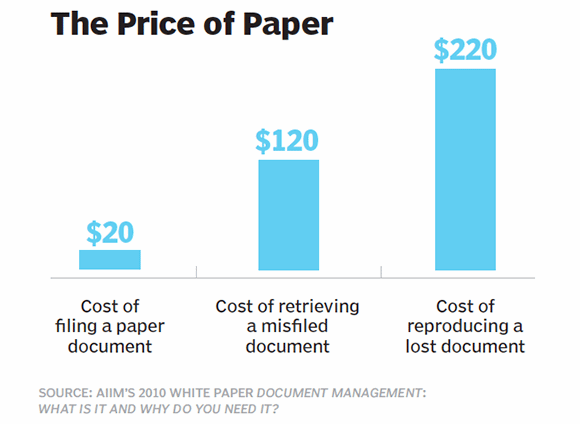 "We have to maintain custody of those records and control them," Herkert said. With a Software as a Service model, the state can easily apply retention and disposition policies and limit access "to only those people who should have access to that information."

The cloud-based use of Hewlett-Packard's TRIM technology (now known as Records Manager) was also scalable, as more departments joined the system. And it was cost-effective, enabling departments with smaller budgets to benefit without paying the full freight for a cloud system.

This ability for lesser-funded departments to ride on the coattails of the system is the real win, Herkert said. "It all ties into the idea that everyone doesn't have to have their own system. Because of the approach we've taken, we've made it affordable to all."

Changing with the times

But if companies recognize the need for better records management practices and technologies, there is still a gulf between knowledge and action.

According to a report published this year by consultancy Cohasset Associates, AIIM and ARMA International, 78% of survey respondents said it's difficult to change a "keep-everything culture." If technologies need to mature, people's resistance to new ways of working also has to change.

Even records management evangelists acknowledge that change management is necessary for initiatives to be successful. People and processes also have to get in line with project goals, and all workers with entrenched ways of doing things must brace themselves for rethinking things.

"People have to … take the time to research what this means for them, to put in the work," WECU's Moser said. How documents are saved, where they are saved, naming conventions and so forth need to be thought through. "People don't think about the stops in between Point A and Point B. When you are done with this document, where does it go?"

For more on records management challenges

The Oregon government's Herkert emphasized that records management changes the way people work, and few employees will welcome that. Workers usually feel territorial about where they save files -- to desktops or public drives -- and how they name them, even if these practices make the files harder to retrieve later on.

"It's hard to get people to change what they're doing," she said. But customizing systems to ease the pain of change can help, as can good governance. To that end, Herkert developed hyperlinks that automatically bring users to file locations rather than requiring them to navigate and drag and drop. The state has also written policies and procedures that require employees to use the system and address noncompliance with additional training.

Keeping pace with the pace of business

"All this stuff is content, not just records," said Steve Weissman of consultancy Holly Group. "Strategically, when you think about how to manage your information and then how to treat it [as the] valuable asset it is, you have to think about it holistically. If you forget a piece, there is already a hole in your strategy." 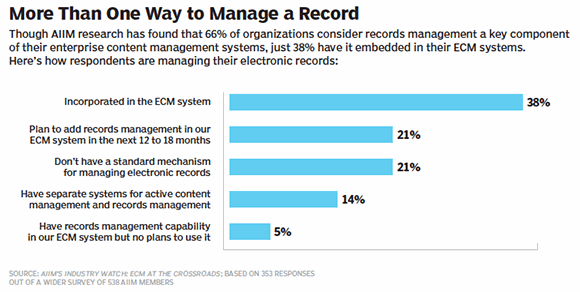 Industry experts not only advocate for information governance but also for demonstrating how information management affects the bottom line. A company with poor records management practices can easily be engulfed by its competition. In simple terms, managing information has become the currency of doing business today.

"If you're not already on a document management system, you have to get on the bandwagon and start to digitize and be comfortable with the technology," Moser said. "If you're not able to provide it, there's probably a competing company that will."

Read part one of this series on records management.

Article 7 of 12Next Article

Access to all of our back issues
2018
View All