As the first case of Ebola diagnosed on U.S. soil became known to the American public, conversation, information, rumor and fear also spread -- some might say, like a virus.

The Atlanta, Ga.-based Centers for Disease Control and Prevention (CDC) has been at the forefront of this crisis, along with other world health organizations that have led the charge in sending relief efforts to West Africa. The CDC has played a critical role in outbreaks like the SARS and H1N1 viruses in educating the public about risks, training workers and sending resources to affected areas.

But taking a leadership position has been a problem for the CDC, and traditional as well as social media outlets have only helped to complicate things for the agency. The rapid dissemination of information, as well as the confusion surrounding the disease, has placed the agency squarely in the clutches of a frenzied public. "People are understandably fearful and angry," said Jessica Schindelar, the acting social media lead in the CDC's Office of the Associate Director for Communication.

Schindelar sat down with SearchContentManagement to talk about how social media channels have played into the Ebola crisis and how the CDC has adjusted as new information emerges -- despite the fact that, Schindelar said, the CDC has not changed its social media strategy.

SearchCM: Do you think the social channel has accelerated the pace of misinformation in this crisis?

Jessica Schindelar: It absolutely has. Our Facebook page has been bearing the brunt of fear and misinformation as directed toward the agency. As far as our social media strategy, we haven't changed it. We're providing the best information we have when we have it. A lot of people may not believe it. We're doing our best to monitor regularly to correct misinformation. We work with content experts to answer people's questions and to correct misinformation. We've hosted a couple Twitter chats [to answer the public's questions about Ebola] and a Facebook Q&A. We had experts sit down for an hour on that chat, which had our highest reach and participation for a Twitter chat; we had 7,000 mentions and participants.

In our chats, we focus on how this disease is spread and not spread -- for example, that it's not airborne: the difference between airborne transmission and droplet transmission -- and we followed up on Oct. 8 with another chat.

Since the CDC has released new guidelines for healthcare workers, has social media helped to spread the word and reinvigorate the public's confidence in the CDC? What about using social to distribute video of how healthcare workers can remove protective gear safely?

Schindelar: We're using social channels in concert with some of the in-person trainings and events that agency is doing with healthcare workers specifically. We're trying to answer questions like, 'If [Nina Pham and Amber Vincent from Texas Health Presbyterian Hospital] were wearing protective equipment, how did they get the virus?' There's a lot of interest in the general public about what we're doing to make the whole process safer for healthcare workers treating Ebola patients. 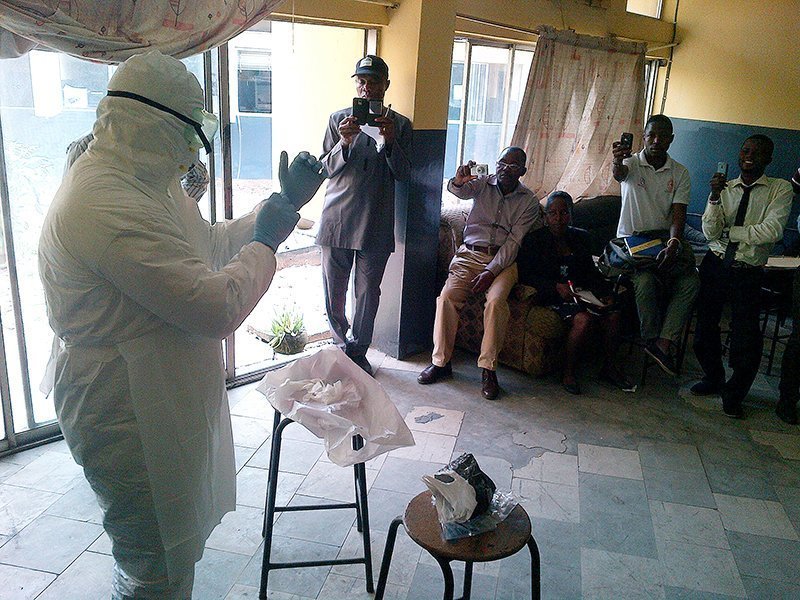 An instructor from the Centers for Disease Control and Prevention team, left, leads a training session on Ebola infection control on August 11, 2014 in Lagos, Nigeria.

So there is a dual component to our strategy: We're using social media to raise awareness that we have changed the guidance documents, and talking about what's different in them, that the science has evolved. And in concert, we're doing in-person training events. Some videos are being developed right now for healthcare workers specifically. We're still in the process now that the guidance has been rolled out.

Is social media an advantage to get the information out quickly?

Schindelar: We don't want our messaging about protecting healthcare workers to scare the general public into thinking they need protective equipment just to be out among the general public. There has to be a balance.

So we're targeting healthcare workers; there was a training recently in New York, for example. We're using other channels through webinars, etc. to educate healthcare workers specifically. Unless you are treating patients, the risk to the general public is relatively low. We don't want people to freak out

Do you think there's a lack of trust in the CDC today?

Schindelar: I do see, particularly within social media channels, members of the public may think we're lying; they don't believe the information we're putting out. Early on, we said -- and we've said this all along -- that there wouldn't be a widespread outbreak in the United States. I saw a poll yesterday that while trust in CDC ability to handle the outbreak is high -- it's down about 11% -- it's still around 60% of respondents still think that we're able to control this.

Did the CDC contribute to confusion delivering information that has been perceived as contradictory?

Schindelar: This is something concrete we're dealing with this right now: There's a study on the WHO [World Health Organization] website that says in 2% of people, they don't show symptoms until up to 42 days later. We're saying that every piece of science we have says that the 21-day incubation period is accurate. And doctors have come out and said that the monitoring period should be longer.

There's a lot of people questioning, a lot of nuggets of information that are feeding doubt into what we're saying. We've been dealing with this virus for 38 years. While there is no cure, we are basing our recommendations on the best science available.

Even though you've mentioned that some people will never believe the CDC, do you also see signs that the power of the crowd is self-correcting?

Schindelar: We're starting to see people come in and defend the CDC -- and experts as well who are coming in to correct some of the misinformation. I'm starting to see the tide turning, where the positive is starting to tip the negative.

Do you see this change as a result of organized efforts the CDC has taken -- such as the release of the new guidelines -- or more how this crisis is evolving naturally, where Nigeria has recently been cleared of the virus?

Schindelar: It's a combination. The fact that no one else has contracted Ebola among the contacts in Dallas who have been in quarantine and have now come out of the 21-day incubation period is huge. And our updating the protective equipment guidance -- when we started posting about that, I started seeing more of the positive coming out. There are still detractors saying things like, 'Why didn't you do this a year ago?'

But as the crisis is evolving and we learn more about the diseases, we'll continue to update what we know about it and what we recommend about it. It's also because we are willing to say, 'We're updating based on what we know now.' With Nigeria being outbreak-free, that's good news.

But in West Africa it's still very bad, and what's going on here has detracted from that.

CDC Director Thomas Frieden has basically said, 'What's happening in West Africa is our problem. Until we solve it there, we run the risk of exposing ourselves in the U.S.' Do you think that idea has been accepted?

Schindelar: He's said all along that to reduce the risk of more cases coming to the United States, we have to stop it in West Africa. We were talking about the disease detectives over in Africa, sharing photos and videos from the people who were there.

Now we haven't been doing a lot of that recently because we are more focused on the domestic fears and what's been happening here. Because, frankly, that is what our social media audience cares about -- it directly affects them more. But the fact is the risk can't go down to zero until we solve the problem in West Africa. It's an important message that has gotten lost in the past couple of weeks.

Is the collaborative economy always a good thing?

Your social media strategy should be about the content